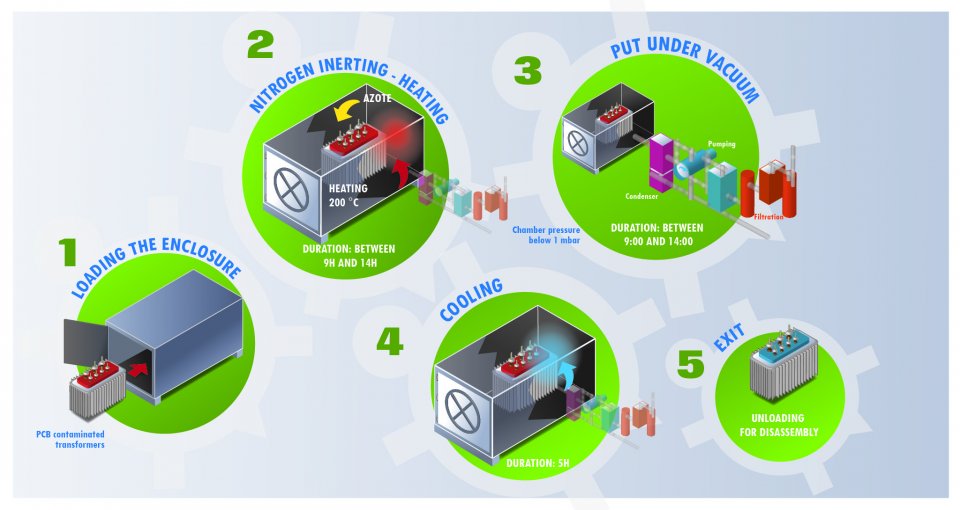 In 2007, after several years of research, the CHIMIREC Group developed and patented an innovative treatment process called "push vacuum", unique in France, which allows to extract PCBs (more known commercially as "Pyralene") from waste that contains it and to reduce its toxicity.

Where do PCBs come from?

They have long been used in lubricants and fire retardants of electrical equipment (transformers and capacitors), in heat exchangers and in hydraulic systems. They have also been used as heat transfer fluids and as additives in paint, self-copying papers, sealing materials and plastics.

What is the recovery process?

Thanks to the technique of the pushed vacuum, PCBs are sucked out without having to disassemble the contaminated transformers. This process, which replaces the extraction technique with a polluting solvent (hydrocarbon chloride) breaks down into several phases: setting a slight depression within the polluted transformer enclosure, inerting with nitrogen and heating of the transformer at 200° C, push vacuuming at the same time of the PCBs, cooling of the transformer before taking it out of its enclosure to disassembling it.

What are these decontaminated materials for?

The CHIMIREC Group processes 30,000 tonnes per year of PCB-polluted materials and oils, including 10,000 contaminated transformers. Decontaminated metals (steel, copper, ferro-silicon wafers) are recycled and reused in specialized processes. Oils with a PCB content of less than 2,000 ppm are dechlorinated and recovered in clear oils. Those with a content of more than 2,000 ppm are incinerated and produce energy.

What is the impact to the environment?

The process invented by the CHIMIREC Group significantly reduces VOC emissions and waste production, compared to the old technique of extraction of hydrocarbon chloride harmful and aggressive to the ozone layer. It removes PCBs from equipment and fluids. PCBs that are very dangerous to humans and the environment, and their production has been banned since 1980.

What are the recovery rates?